SteamWorks = Closed Due To Wealth? 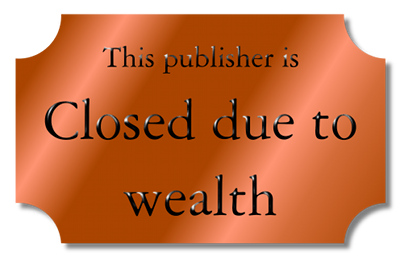 In this article I explain why publishers who use SteamWorks for the retail version of their games have no right to complain about lost sales.

Fact A: Publishers complain about sales and profits

It seems as if not a day goes by where publishers complain about their profits.

The list goes on. If you believe the stories then it is a wonder that the PC branch of any random publisher yields enough profit to pay for the janitor at the end of the month.

An increasing number of games nowadays are published via Steam. Digital distribution in itself is not so much of a problem and may offer interesting options for small and independent developers. Services like GOG are easy to use and provide DRM-free games that you can actually buy. Steam is a DRM service and as such, less desirable. It effectively takes away your ownership. But that is not the issue here. Lets forget about the DRM aspect for the moment.

The issue here is the non-digital distribution. The normal box with a DVD inside that you purchase in the retail store around the corner. The thing you choose if you have no internet connection or only a slow internet connection (such as analogue modem or ISDN). Or if you simply dont want internet on your gaming PC  e.g. for security reasons. And an increasing number of games use SteamWorks for those retail versions.

Ok, thats bad. But a typical problem for DRM games. So why is SteamWorks even worse? Lets look at people who have an internet connection but only a slow one, like modem or ISDN. Theoretically, they can play the game. Thats what the system requirements of these games claim. They only mention that one needs an internet connection but do not demand a certain minimum bandwidth. And as experience with other DRM systems (like Tagès or SecuROM) shows, the few data packets that are exchanged for a DRM authentication are no problem for a slow internet. But with SteamWorks games, things are different. These games cannot be reasonably played without a fast internet connection.

SteamWorks is not practical with slow internet

Let me translate the experience of this user from the World of Risen forum who recently bought Skyrim (a SteamWorks game).

1. I clicked on install game and the Steam client first started to update itself. It was about 30 MB and took about 1 hour. There was no way around it.
2. Creating an account took only a few minutes (where Steam repeatedly froze shortly and you thought that it had crashed). Then the game installed itself from the DVD. Finally I got the message: You successfully installed the game and can now play it. Yeehaa!
3. Guess again! It only installed 4.3 GB from the DVD and Steam now wanted to pull another 1.4 GB from the internet when I clicked the play button (not sure if this is a patch or the rest of the base game). 1.4 GB mean 36 hours of download with my 64 kbit/s ISDN modem.
After 8 hours of frustrating failed attempts (all the hints from the support forums did not work) I cancelled the installation.

This shows that SteamWorks games with slow internet connections are not feasible. Even if he somehow had managed to install the game without those massive downloads, he would not have been able to use the latest patches. Because the only way to get them is through Steam.

You might get the data files of the original game release on DVD. But release versions are often full of bugs and actually require a release patch. Besides, you paid for the game like everyone else. So why should you not get the improvements of the latest patch like everyone else?

With normal games, your slow internet connection would not be that much of a problem. You could still download the patch at a friends house or in an internet café. Or you could buy a gaming magazine for a few bucks and get the patch from the attached DVD. Or maybe your local games store wanted to do you a service and copied the patch to a flash-drive of yours when you bought the game. Thats how things were done before Steam. But with Steam, thats all not possible anymore. Steam only knows one way to patch games: Steam. And for that, you need fast internet. On the machine that you want to play on.

According to EuroStat, almost one third of the population in the EU has no broadband internet (as of 2011). That is how things are in Germany as well. In some other single countries, its even worse (Greece: 55%, Bulgaria: 60%, Romania: 70%, etc.). And it seems that compared to the EU, the US are not really that much better off. All these people could be the publishers best customers because it makes no sense for them to illegally download the games. Unfortunately, it also makes no sense for them to buy these games. Not if they have to deal with SteamWorks.

So on one side, we have a lot of gamers with no or only slow internet connection. And these guys are especially motivated to actually buy the games and not pirate them because due to their slow internet, they simply cant download the games. Even if they want to. But those potential customers are treated like crap by the publishers.

On the other side, we have publishers lamenting about lost sales and piracy and loss of profits and all that. And when the customers who would be happy to give them their money come and ask for a version that they can actually use in a practical way with no or slow internet connections, what do these publishers do? They put their fingers into their ears and raise the volume of their laments! Way to go, dudes.

Dont get me wrong. It is a publishers prerogative to release their games in any way they want. If the owner of a shop wants to close at 2 p.m. and not serve the people who have to work until 5 p.m., that is his decision as well. But it is a bit strange if  at the same time  this shop owner complains about his lack of profits. Someone who closes early every day and ignores customers must have enough money already. He is basically closing due to wealth.

So my point is: If publishers can afford to ignore all the gamers with no or slow internet connections, they must be doing pretty well for themselves.