Savegame-Editor for Drakensang - River Of Time 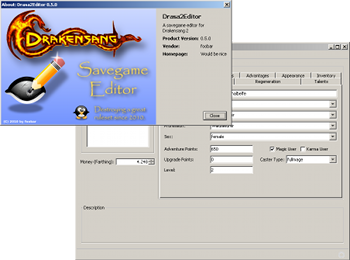 On this page, I present to you my savegame editor for the roleplaying game "Drakensang - The River Of Time". I wrote it primarily for myself. Then I polished it a bit and released it to the general public. It's free of charge for anybody to use but also comes with no warranty whatsoever.

The program is stable. There was one year long beta phase during which everyone was invited to test it and report bugs. Since I got no further bug reports for 9 months, I assume that either all bugs are squashed or no one is interested in the software anymore. Either way, my job is done.

I will likely not implement any new features.

Still, I strongly recommend that you make a backup of any file you edit - as with any savegame manipulation.

But there is already an editor!

Yes, the one by Philipp. A very nice program but I have two issues with it. First, I cannot start it anymore. For some time now, all I get is an exception right at the start. My attempts to contact the author about this failed and I did not want to bother him any longer with my problems. Secondly, Philipps' editor cannot change everything I want to change. Or at least it could not when it still worked on my system. I don't know what functions he added in the last months.

Bottom line: Instead of whining and complaining, I chose to make me an editor myself that could do what I wanted. Then I figured I could release it to the public in case someone might like it.

I have a bug report or a suggestion!

Go ahead and send it to me (address: foobar -at- world of risen -dot- de). I do not promise that every wish will be granted because I mainly wrote the editor for myself. But I will seriously consider whatever you send me.

Are there any planned features?

For now, everything is implemented. I would like to debug everything that is there before adding new stuff - at least for a while. Nothing is decided yet but I played with the thought to add these features:

During development, I was using the OpenJDK, too. But the SQLite driver for Java which I used had some problems with it. Those problems disappeared after I switched to the original from Sun (now Oracle). I do not know if these problems are fixed by now but I strongly recommend that you try the Oracle JRE if you run into any problems while using OpenJDK. Update: This is no longer relavant, the editor works just fine with recent versions of OpenJDK.

When I double-click on the JAR file, nothing happens!

If youre using the ojdk Build of OpenJDK, make sure you select JAR Files Association in the setup of the JDK. If youre using some other Java distribution, try to look for a similar option.