An explanation of the three concepts of quest and narrative structure in RPGs.

A story  any story  is a linear series of events. That is because it must be a logical development. The evil wizard kidnaps the princess, therefore the king is looking for ways to rescue her. Only because this happened before, the protagonist can hear about that and travel to the palace. There he can get an audience and sets forth to embark on a journey to rescue the fair maiden. And so on, and so forth.

A leads to B leads to C leads to D. And so on. That is why people also talk about a Golden Thread or a plot-line. All are one-dimensional analogies. You cannot tell a story without linearity because there would be no development and no causality. Everything could happen at once or in any random order. With linear games, you have no choices and thus, no consequences (of your own making, that is). At least not as far as the story is concerned (you might still pick different character classes or something like that).

RPGs, at least the good ones, usually do not have this. Because there would be no way to influence the story. You could only drive it forward but not change its direction. Adventures make use of that concept quite frequently, however. 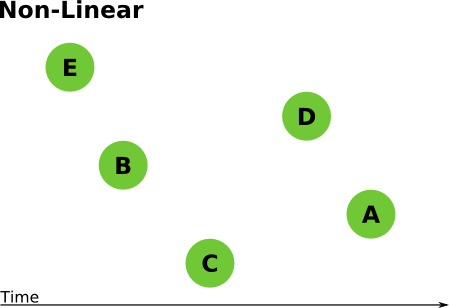 Non-linear RPGs cannot present a continuous story line or plot. You only have individual quests (which, in themselves, are again either linear or multi-linear). But there is no big picture behind those quests. They may each outline certain aspects but they are unable to form a real story with the typical elements (e.g. an arc of suspense). Because there is no given order. You have a lot of choices but usually, only few real consequences. Since all quests must be playable in (almost) any order  or else you have introduced some linearity , no quest outcome may change the world in a way that renders the other quests implausible or obsolete.

RPGs that use this approach are usually not trying to tell a story. They want to provide a sandbox in which you can do what you want without the constraints of having to save the princess or whatever.

Even story-driven RPGs employ this concept for most of their side quests as it is the most simple one. 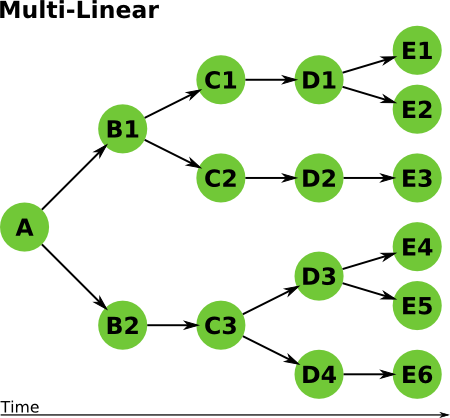 Because a purely linear storyline does not offer much in matters of roleplaying, a good solution is to branch the line at certain points. Whenever it makes sense in the over-arching plot, you are presented with a choice. Depending on that choice, they story continues with a different course. You experience A and can then choose between B1 and B2, both of which are plausible options at that point. Each leads, in turn, to new events and choices. And so on, and so forth. Basically, you can choose between multiple routes through this story tree but each route in itself is still linear. Thus the name multi-linearity. It is a compromise between the restraints of story-telling and the freedom of roleplaying.

Since this leads to an exponential growth of story variations which must all be prepared by a writer (you cannot just calculate them), some developers shun this approach.

Others try to keep the complexity (and costs) manageable by uniting branches again after a certain time. For instance, if your goal is to enter the castle of the evil wizard, then you can climb over the walls, sneak through the back entrance, smuggle yourself inside in some shipping crates, bribe a guard or whatever the developers thought prudent. Maybe some are easier than others and you may encounter different problems with each option. However, the outcome is always the same: You are in the castle. And how you got there does not matter for the rest of the game. Hence, the developer does not have to concern himself with the different methods to enter the castle after this point.

The first chapter of the game Gothic 2 is a good example. The goal for that chapter is to reach a certain person, one Lord Hagen. To get to him, you must first get into the city. For which the game offers many options. Once you are in the city, it does not matter how you got there (branches unite). But you now have to get into the upper quarter of the city. Again, you have several options. In detail:

Lets say you want to join the city watch. Again, you have more than one way to do so:

Let us assume you want to become a citizen. To get your apprenticeship, at least 4 of the 5 craftsmen in town must agree. Each one presents a task to you. The smith, for instance, wants you to prove that you are no coward and will defend the town if necessary. As proof for your bravery, he demands an orc weapon. And yet again, you have different options: