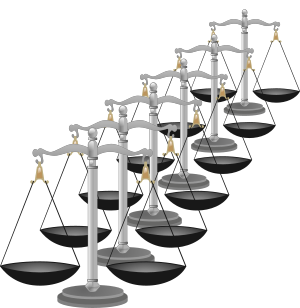 I see a lot of discussion in forums about how this specific game mechanic is unbalancing and that feature is totally overpowered. Often times it appears as if people are making it their personal hobby to find any and all imbalanced aspects of a game and point them out. Usually in terms that make it seem as though these are bad.

In this little article, however, I want to do the opposite.

I want to make the case that too much balancing is actually counter-productive and a bad thing. That too many modern games have fallen for this trap and have become overbalanced.

I would like to make it clear right from the start that I am only talking about singleplayer roleplaying games here.

In a multiplayer environment, where you are competing with or against other humans, it might make sense to strive for perfect balance. After all, youd want a level playing field in a competition, right?

And I also do not know enough about other genres (e.g. strategy titles or sports games) to feel comfortable making statements about them. Some of the things Im going to mention seem like they might also apply to other genres. But there might be further considerations that Im unable to see.

So lets stick to singleplayer RPGs.

What is balancing and why do we need it?

According to Wikipedia, balance in game-design is: the concept and the practice of tuning a game's rules, usually with the goal of preventing any of its component systems from being ineffective or otherwise undesirable when compared to their peers. An unbalanced system represents wasted development resources at the very least, and at worst can undermine the game's entire ruleset by making important roles or tasks impossible to perform.

To some degree, the statement is correct, however. The game should provide a challenge and not be too easy to win. It should also not be too difficult (unwinnable). That wouldnt be fun either. Whats missing is the caveat that too much balancing can be just as bad. But well get to that later.

For now, lets just get in on the record that Im completely on board with the general concept of balancing a game.

The need for imbalance

Lets look at it from the 30,000 feet view, where things get really simple.

Imagine a hypothetical game with maximum balance. If everything is perfectly fair and balanced, then theres no advantage in choosing one specific tactic or strategy over another. If there was, if one method was more successful, then it wouldnt be balanced anymore. That method would then be overpowered compared to the others.

But then, if all possible tactics are the same, whats the point? You can just randomly pick one and stick to it. There would be no point in exploring different options, trying different approaches, and experimenting with the available possibilities. Would that really make the game any more fun?

If youre with me so far, you have already conceded the main point of the article: Too much balance is harmful.

Now were just talking shades of grey. How much balancing exactly do we need? Where exactly do we draw the line? How much imbalance should we deliberately create? And yes, that is a legitimate discussion to have. And different people can come away with different opinions.

The single fight vs. character build

It should also be mentioned that we have two competing goals here that are mutually exclusive. On the one hand, you want every fight to be challenging. On the other hand, you want to build and advance your character. Making him or her stronger, getting better equipment, and all of that. But once the character has become better, shouldnt the fights become easier? But if theyre easier, theyre not as much of a challenge anymore. On the other hand, if the fights are still a challenge, then all the work you put into your character was basically for nothing. This is why level scaling is also such a bad idea, by the way. If enemies are always scaled to your level, you dont feel the progress of your character anymore. The process of levelling turns into a walk through a tar pit: You struggle, but you don't move forward.

So even balance itself is not as clear-cut as it may seem. There are instances where you just cant have your cake and eat it, too. Where you have to make a choice, put the emphasis on something, and live with the reality that something else will have to suffer for it.

The previous sections only focused on the tactical and strategical aspects of combat. That is where balancing is most noticeable, after all.

However, this is not the only consideration to make when thinking about balance. Looking at a lot of modern games, it seems almost heretical to point this out, but Im going to do it anyway: In a singleplayer RPG, combat is not the be all and end all of the game!

The extreme overuse of combat in RPGs is another concern of mine. But thats a discussion for another day. For the moment, lets just say that Im not against combat per se. But Id like it to be meaningful. To serve a purpose in the overarching plot and be used carefully.

And this is another area where imbalance can be useful and enhance the gaming experience. Let us look at an example to illustrate that point:

In the first chapter of Gothic 2, you have to join one of three possible factions. One of them are the mercenaries who have taken up residency at a large farm. The mercs are strong and tough warriors. And if you want to join them, you have to convince a majority of them to vote for you. Not to go into too much detail, but one of the ways you can gain support puts you at odds with another merc named Sylvio. And Sylvios right hand man, a brute by the name of Bullco. Bullco eventually makes it clear to you that you should leave the farm and not return. Or else.

Now, this Bullco is not only a veritable bully, but also one of the strongest mercs around. If you simply attack him, hell pound you into the ground without breaking a sweat.

But there are ways to defeat him. You can, for example, cast the spell sleep on him. This will incapacitate him for a short period of time. Which you can then use to beat the crap out of him. And you defeating this mountain of a man whos hated by virtually everyone at the farm gets you a lot of admiration from the people around.

From a purely combat-focussed point of view, this is a big mistake in terms of game design. A weak low-level character with crappy beginners equipment being able to win against a strong, high-level character with good weapons and armour? I can hear the combat fetishists screaming in my head: Imba! OPed! OMG!

But from a narrative point of view, this is really good game design. You are faced with a problem, and have to find a clever way to deal with it. You use your wits against Bullcos brute strength and come out on top. Thats fun! Its one of the highlights of the game!

And yet, the game still maintain a form of balance, because you cannot defeat every NPC in this fashion. In this chapter, you can only use magic via scrolls. And the number of scrolls for these spells is limited, so you have to pick your battles.

While some measure of balancing is imperative, it must never be overused. The main purpose of a game is to have fun. And looking for weaknesses, exploiting loopholes in the rules, using clever little tricks to defeat enemies that are nominally too strong for you... that can also be a lot of fun!

Too many games today are overbalanced. Every spell, buff, item, and enhancement is carefully crafted to not break the combat system. But that also makes them less interesting, less attractive, less meaningful.

If each accessory only gives you a +2% advantage, then you need around 5-10 of them for the effect to become even noticeable. What does that say about the single item?

On the other hand, if theres one single amulet that lets you do something really cool (even if its imba), how happy would you be to actually find it? Through how much trouble would you be willing to go in order to get it? How memorable would that item be? And with it, the game itself?

Add the narrative benefits on top, and you can see that a dash of imbalance and crazyness isnt actually such a bad thing to have in a singleplayer RPG.